Bengt Berg was one of the world’s first nature filmmakers who started taking photographs in 1910. At the Victoria theatre in Berlin, the largest "cinematograph theatre" at the time, he would explain to the audience, from a speaker's chair, during his soundless films. During one consecutive period of four months, there was a full house (2600 people each show) twice a day, every day. He was also the author of almost 30 books translated into 16 languages. His books were full of wildlife photographs and humorous stories from Sweden, Africa, India, Bhutan and the Himalayas. He was a vivid debater of various subjects to do with birds, flora, and fauna in general. More often than not, his booming voice or pen would declare that man was being far too greedy. Bengt Berg was many things besides a photographer and a writer. He was also a hunter and a believer in natural life as a being amongst other animals. But first and foremost, his love was birds and in his writing he would frequently declare his passion for the winged creatures surrounding us all. It was thanks to him that the sea eagle, greylag goose, golden eagle and mute swan of Sweden were saved. He was also the first to film the shoebill stork in South Sudan (early 1920s). Also in the 1920s, he followed the common cranes from Europe to find out the southernmost point they went to in Africa. In 1930, he photographed the bearded vulture in the Himalayas, from a balloon basket fastened to a very long rope. Here, he and, sometimes, his wife hung precariously at great heights to get clear photographs of the birds inside their caves on the cliff walls. At home in Sweden, he was deeply involved in fencing private land to protect and study the habits of the red deer. His travels across the globe also turned him towards filming, photographing and writing about mammals, like the elephants of Africa and the tigers and rhinoceroses of India. In South Sudan, he filmed the shoebill stork and took the longest piece of film that had yet been taken of the African elephant. Moreover, it was through his book on the Indian rhinoceros in 1932 that he brought the world's attention to the fact that the Chinese were massacring them due to their demand for rhinoceros horns. Dr. Bengt Berg looked with a very sober, albeit furious, gaze at man's contrasting thoughtlessness in nature and unrealistic approach to being a human animal amongst other animals. Some thought him too loudly critical of man and claimed that he loved other species more than his own. "Do not judge me on my person, but on the work I have done here," were words he wrote not long before he died. On 31 July 1967, at 82 years old, he died from a stroke while swimming in the archipelago at his estate in Eriksberg, Blekinge, Sweden. He is best remembered for his many travel books, his photographs of nature and films-- taken on several expeditions around the world including Europe, Africa and Asia. 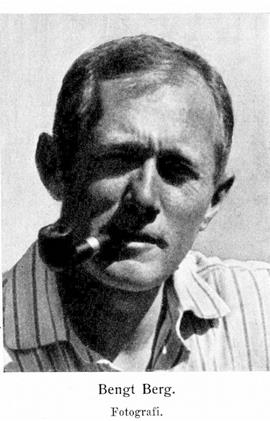