The second voyage of James Cook, from 1772 to 1775, commissioned by the British government with advice from the Royal Society, was designed to circumnavigate the globe as far south as possible to finally determine whether there was any great southern landmass, or Terra Australis. On his first voyage, Cook had demonstrated by circumnavigating New Zealand that it was not attached to a larger landmass to the south, and he charted almost the entire eastern coastline of Australia, yet Terra Australis was believed to lie further south. Alexander Dalrymple and others of the Royal Society still believed that this massive southern continent should exist. After a delay brought about by the botanist Joseph Banks' unreasonable demands, the ships Resolution and Adventure were fitted for the voyage and set sail for the Antarctic in July 1772.

On 17 January 1773, Resolution was the first ship to venture south of the Antarctic Circle, which she did twice more on this voyage. The final such crossing, on 3 February 1774, was to be the most southerly penetration, reaching latitude 71°10′ South at longitude 106°54′ West. Cook undertook a series of vast sweeps across the Pacific, finally proving there was no Terra Australis in temperate latitudes by sailing over most of its predicted locations.

In the course of the voyage he visited Easter Island, the Marquesas, Tahiti, the Society Islands, Niue, the Tonga Islands, the New Hebrides, New Caledonia, Norfolk Island, Palmerston Island, South Sandwich Islands, and South Georgia, many of which he named in the process. Cook proved the Terra Australis Incognita to be a myth and predicted that an Antarctic land would be found beyond the ice barrier.

On this voyage the Larcum Kendall K1 chronometer was successfully employed by William Wales to calculate longitude. Wales compiled a log book of the voyage, recording locations and conditions and the use and testing of various instruments, as well as making many observations of the people and places encountered on the voyage. 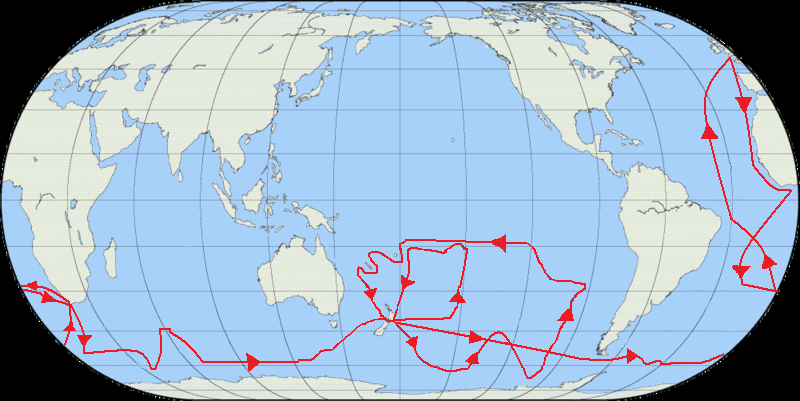